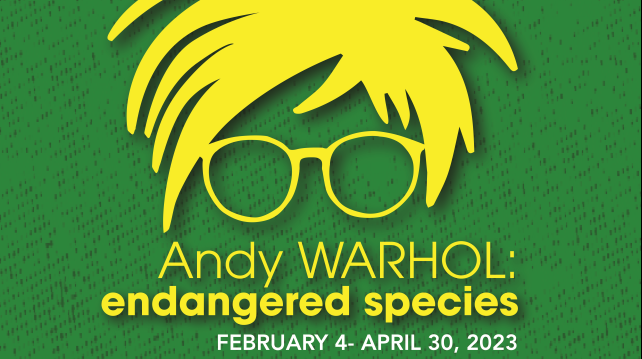 Andy Warhol was one of the most influential artists of the 20th century, creating some of the most recognizable images ever produced.  A founding member of the Pop art movement, his work was across several media including painting, printmaking, photography, drawing, and sculpture.  Challenging former concepts of modern art and veering away from abstraction, he embraced popular culture and commercial processes to produce work that appealed to the masses.

Environmental activism and Andy Warhol are rarely associated, but Endangered Species was one of Warhol’s most influential artworks. He created the entire project in 1983, ten years after the passage of the Endangered Species Act of 1973, which defined endangered species as a humanitarian matter, banned trade involving the endangered animals, and made steps to protect the animal’s original habitats.

Warhol’s Endangered Species series consists of ten oversized silkscreen prints of the nearly extinct animals identified in 1973. Each animal was given Warhol’s artistic star treatment in the same style as his iconic celebrity portraits.  Warhol fondly referred to this series as his “animals in makeup,” given the bold pop colors he used to portray the animals as larger than life.

Warhol’s elevation of the series to pop culture status played a huge role in raising awareness of these endangered species and generated funds for their preservation.  Likewise, Warhol propelled the efforts of conservation forward.  As of 2021, six of the ten animals are still threatened with possible extinction.

The Upcountry History Museum is one of only three museums selected by Art Bridges Foundation/Crystal Bridges Museum, Bentonville, AR, to host the Andy Warhol: Endangered Species exhibition project.  In addition to the ten Endangered Species prints by Andy Warhol, the exhibition examines the works through four engaging and multi-disciplinary themes: Activism, Animals, History and Art.

The bilingual exhibition (English and Spanish) also features experiential components specifically designed for individuals who are blind or have low vision.