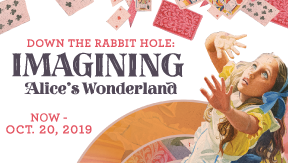 Inspired by real events and a real child, Alice’s Adventures in Wonderland was dreamt up on a summer’s day in 1862, by Charles Ludwidge Dodgson, who later assumed the pen name Lewis Carroll. It is said that Carroll’s Alice books were the origin of all later children’s literature. In Alice, for the first time, readers found a realistic child taking part in a story whose intention was entirely fun. Both children and adults loved them at once, and 157 years’ later have never stopped doing so. It was not only Lewis Carroll’s words that captured readers’ imaginations; John Tenniel’s illustrations brought the story to life and remain in our collective consciousness to this day. Tenniel’s artwork provided the original image of Alice along with the amazing characters that she met in Wonderland.

Down the Rabbit Hole: Imagining Alice’s Wonderland, a 1,200 square foot exhibition, organized by the Upcountry History Museum, will explore the kaleidoscope of artistic re-imaginings of Alice from the 1860s to the present. Original Alice paintings, drawings, illustrations, set designs, puppets, film costumes and props will reflect diverse artistic interpretations. From Tenniel’s original Victorian illustrations to costumes, props and sets from Walt Disney Pictures Academy Award winning live action film Alice in Wonderland, the exhibition will examine multiple perspectives of one of literature’s greatest paradoxes that continues to inspire imagination, creativity, and discussion. Rich with visual interpretation, the exhibit will take visitors on Alice’s journey through the cultural, technological and societal shifts that have compelled artists, filmmakers and fans to return to the Alice tales again and again.