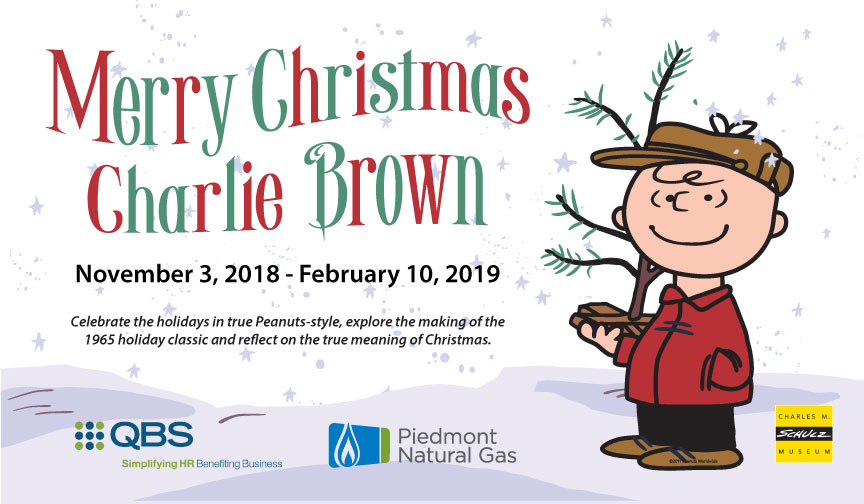 The holidays just wouldn’t be the same without The Peanuts gang. And for millions of people around the world, it really isn’t Christmas until they have watched A Charlie Brown Christmas.

Celebrating the holidays in true Peanuts-style, the Upcountry History Museum will host the latest traveling exhibition from the Charles M. Schulz Museum, titled Merry Christmas, Charlie Brown! The Peanuts-centric exhibit invites visitors to enter the world of Charlie Brown, as they explore the making of the 1965 holiday classic and reflect on the true meaning of Christmas.

Peanuts had become a phenomenon worldwide by the mid-1960s, and the Christmas special was commissioned and sponsored by The Coca Cola Company. It was written over a period of several weeks, and animated on a shoestring budget in only six months. In casting the characters, the producers went an unconventional route, hiring child actors. The program’s soundtrack was similarly unorthodox; featuring a jazz score by pianist Vince Guaraldi. Its absence of a laugh track (a staple in US television animation in the 1960s), in addition to its tone, pacing, music, and animation led both the producers and network to wrongly predict the project would be a disaster preceding its broadcast.

Contrary to that apprehension, A Charlie Brown Christmas received high ratings and acclaim from critics, winning both an Emmy and a Peabody Award. It became an annual broadcast in the United States, and has been aired annually during the Christmas season since it premiere. Its success paved the way for a series of Peanuts television specials and
films —and the rest is history!

The Merry Christmas, Charlie Brown! exhibition celebrates the holiday season while offering visitors a behind-the-scenes look at the making of this holiday classic. Artwork, objects, and a video featuring Charles M. Schulz, producer Lee Mendelson, and animator/director Bill Melendez that details the sometimes magical and often madcap making of A Charlie Brown Christmas will be displayed within an immersive Peanuts-themed environment.