Read of the Week – Harriet Tubman 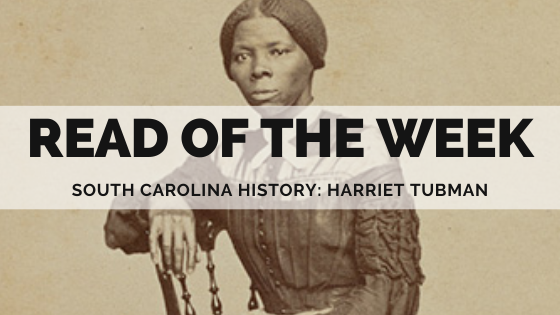 “I had reasoned this out in my mind, there was one of two things I had a right to, liberty or death; if I could not have one, I would have the other.”
– Harriet Tubman

Tubman applied intelligence she learned as an Underground Railroad conductor to lead the Combahee Ferry Raid that freed more than 700 from slavery.

They called her “Moses” for leading enslaved people in the South to freedom up North. But Harriet Tubman fought the institution of slavery well beyond her role as a conductor for the Underground Railroad. As a soldier and spy for the Union Army during the Civil War, Tubman became the first woman to lead an armed military operation in the United States in what is known as the Combahee Ferry Raid.

By January 1, 1863, when the Emancipation Proclamation went into effect, Tubman had been in South Carolina as a volunteer for the Union Army. With her family behind in Auburn, New York, and having established herself as a prominent abolitionist in Boston circles, Tubman, at the request of Massachusetts Governor John Andrew, had gone to Hilton Head, South Carolina, which had fallen to the Union Army early in the war.

For months, Tubman worked as a laundress, opening a wash house, and serving as a nurse, until she was given orders to form a spy ring. Tubman had proven herself invaluable at gathering clandestine information, forming allies and avoiding capture, as she led the Underground Railroad. In her new role, Tubman assumed leadership of a secret military mission in South Carolina’s low country.

“First and foremost, her priorities would be to defeat and destroy the system of slavery and in doing so, to definitely defeat the Confederacy,” said Brandi Brimmer, a history professor at Spelman College and slavery historian.

Tubman partnered with Colonel James Montgomery, an abolitionist who commanded the Second South Carolina Volunteers, a black regiment. Together, the two planned a raid along the Combahee River, to rescue slaves, recruit freed men into the Union Army and obliterate some of the wealthiest rice plantations in the region.

Montgomery had around 300 men, including 50 from a Rhode Island Regiment and Tubman rounded up eight scouts, who helped her map the area and send word to the slaves when the raid would take place.

“She was fearless and she was courageous,” said Kate Clifford Larson, historian and author of Bound for the Promised Land: Harriet Tubman, Portrait of an American Hero. “She had a sensibility. She could get black people to trust her and the Union officers knew that they were not trusted by the local people.”

Overnight Raids Launch From the River

The night of June 1, 1863, Tubman and Montgomery, on a federal ship the John Adams, led two other gunboats, the Sentinel and Harriet A. Weed, out of the St. Helena Sound towards the Combahee River. En route, the Sentinel ran aground, causing troops from that ship to transfer to the other two boats.

As explained in Catherine Clinton’s book, Harriet Tubman: The Road to Freedom, Tubman, who was illiterate, couldn’t write down any intelligence she gathered. Instead, she committed everything to memory, guiding the ships towards strategic points near the shore where fleeing slaves were waiting and Confederate property could be destroyed, all while leading the steamers away from known torpedoes.

“They needed to take gunboats up the river,” said Clinton. “They could have been blown up if they hadn’t had her intelligence.”

Around 2:30 a.m. on June 2, the John Adams and the Harriet A. Weed split up along the river to conduct different raids. Tubman led 150 men on the John Adams toward the fugitives. Tubman, later commenting on the raid, said once the signal was given, she saw slaves running everywhere, with women carrying babies, crying children, squealing pigs, chickens and pots of rice. Rebels tried chasing down the slaves, firing their guns on them. One girl was reportedly killed.

As the escapees ran to the shore, black troops in rowboats transported them to the ships, but chaos ensued in the process. Tubman, who didn’t speak the region’s Gullah dialect, reportedly went on deck and sang a popular song from the abolitionist movement that calmed the group down.

More than 700 escaped slavery and made it onto the gunboats. Troops also disembarked near Field’s Point, torching plantations, fields, mills, warehouses and mansions, causing a humiliating defeat for the Confederacy, including the loss of a pontoon bridge shot to pieces by the gunboats.

Tubman Was Recognized a Hero (But Not Paid)

The ships docked in Beaufort, South Carolina, where a reporter from the Wisconsin State Journal heard what had happened on the Combahee River. He wrote a story without a byline about the “She-Moses” but never mentioned Tubman’s name. He wrote that Montgomery’s “gallant band of 300 soldiers under the guidance of a black woman, dashed into the enemies’ country, struck a bold and effective blow, destroying millions of dollars worth of commissary store, cotton and lordly dwellings, and striking terror to the heart of the rebeldom brought off bear 800 slaves and thousands of dollars worth of property, without losing a man or receiving a scratch.”

But Tubman’s anonymity came to an end in July 1863 when Franklin Sanborn, the editor of Boston’s Commonwealth newspaper, picked up the story and named Harriet Tubman, a friend of his, as the heroine.

Despite the mission’s success, including the recruitment of at least 100 freedmen into the Union Army, Tubman was not compensated for her efforts on the Combahee Ferry Raid. She had petitioned the government several times to be paid for her duties as a soldier. “She was denied because she was a woman,” says Larson.

“By the time we get to the Emancipation Proclamation, we have Lincoln setting out concrete spaces for black men and their recognition in military service,” said Brimmer. “But there’s not really a vision for the work of women who function in the military bearing arms, particularly black women.”

Tubman would eventually get a pension, but only as the widow of a black Union soldier she married after the war, not for her courageous service as a soldier.