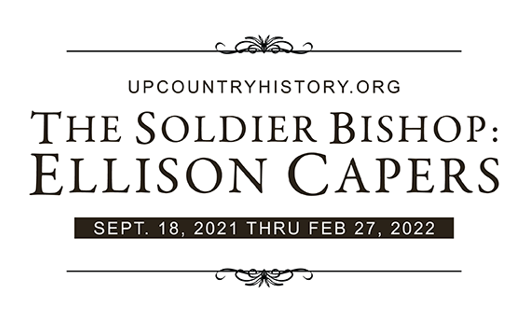 Though he lost loved ones and survived many of his own near-death experiences in some of the most horrific engagements of the American Civil War (1861-1865), Capers’ trust in God and the path before him never faltered. In 1865, at the age of 28, he was promoted in the military to Brigadier General receiving recognition for his leadership and distinguished service. After the war Capers was elected Secretary of State for South Carolina. Even so, his calling to Christ was overpowering. The Governor told him, “You can be a Governor, Senator, or anything you like. You will be a fool to give all this to become a preacher.”

In 1866, Capers accepted a call to Christ Church Episcopal in Greenville, South Carolina, where he served for 20 years. He was consecrated as bishop of the State of South Carolina in 1893 and moved to Charleston. To escape the summer heat, he purchased a plot of land in Cedar Mountain, NC, and erected a cottage. This inspired in Mrs. Capers a dream to erect an Episcopal chapel for the local population. In 1894, this dream became a reality, and “Faith Chapel” was built.

“Faith Chapel” fell into disrepair following Capers death in 1908. In honor of his enduring influence and guidance, a disciple of Capers, the Reverend Dr. Alexander Mitchell from Greenville, began a movement to rebuild the chapel and dedicated the new church, “Faith Memorial Chapel,” in Capers’ memory in 1941.

The exhibit shares the story of Ellison Capers and the history of Faith Memorial Chapel. Historical artifacts, including Capers’ original military sword, the musket balls that nearly killed him, his war diaries and handwritten letters to his wife from the battlefield, and the preserved renderings for rebuilding the Chapel dedicated to his memory, highlight key moments of Capers life’s journey through war, faith, and salvation.