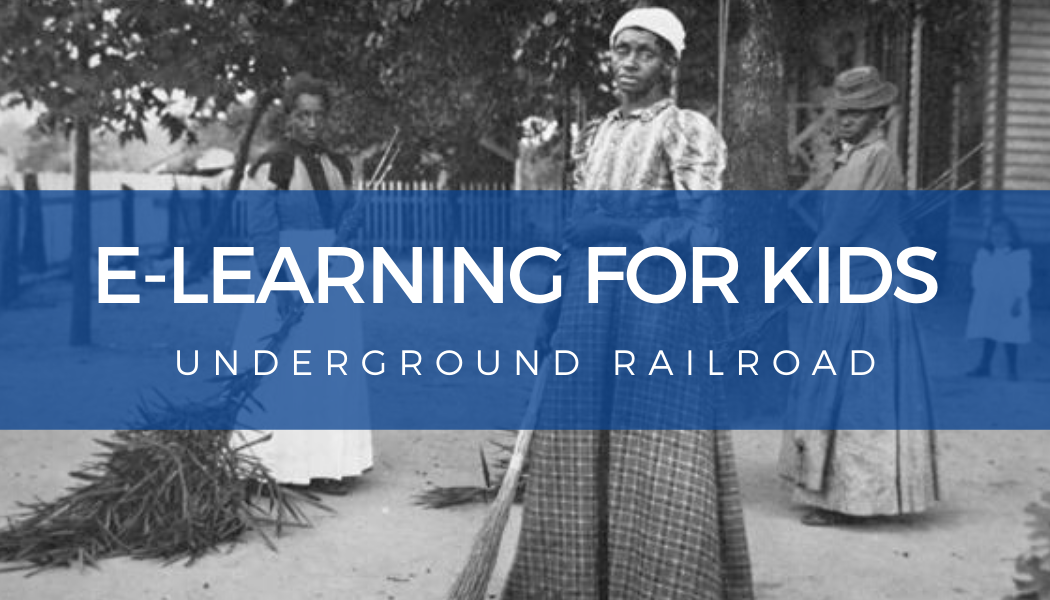 Below are resources to help with your child’s e-learning, while also encouraging their imagination to travel back in time. Like most other places, our doors are closed for the time being, but we still want you to explore the history behind our current changing exhibit, Through Darkness to Light: Photographs Along the Underground Railroad, even if it means doing so from home…for now.

Trace the collective footsteps of men, women and children as they journey towards freedom, following the Underground Railroad.

Project #1 – History of the Underground Railroad This fantastic interactive from Scholastic will allow your child to travel back to 1860 and follow a young slave as he flees a Kentucky plantation for Canada along the Underground Railroad. The interactive slideshow (with audio) lets families read a short article at each stop. They can click on accompanying images to read pop-ups with more information.

To help incorporate South Carolina Social Studies standards, we encourage you to complete the “Growing Up in Slavery” activity listed on part one of the journey to escape from slavery. The activity tells the story of Fannie Moore, who was born a slave in South Carolina in 1849. She told her story in 1937 at the age of 88. Below are direct links to the activity and the accompanying worksheet: Harriet Tubman led more than 300 people from slavery to freedom in the mid-1800s. Born a slave in Maryland, Tubman escaped captivity at the age of 25. She returned to the South 19 times to help other slaves flee to the North. She has become the most famous conductor of the Underground Railroad.

Use this web scavenger hunt (below) from Scholastic to learn more about her remarkable life. Record your answers as you go.

Describe Harriet Tubman’s childhood. What was one of her jobs as a child? How did she get a scar on her head?
Find out about Harriet Tubman’s early life in the America’s Story activity from the Library of Congress.

Describe Harriet Tubman’s escape from slavery. When did she flee? Where did she go? What made her go back?
Learn about Tubman’s daring run to freedom in this article from Biography.

What were some of the reasons Harriet Tubman’s rescues were so successful? How did she discourage slaves who wanted to turn back?
Discover Tubman’s strategies at the Africans in America website from PBS.

After the Civil War, how did Harriet Tubman continue to fight for justice and help those in need?
At the website for the National Women’s Hall of Fame, you can learn how Tubman continued her work after the war.

Read the August 29, 1868 letter to Tubman from her friend, the famous abolitionist Frederick Douglass. What does he say is the main difference between the two of them?
Read Douglass’s letter of encouragement to his fellow abolitionist, Tubman, and learn about their relationship in this article from The New York Times.