Read of the Week – Peanuts 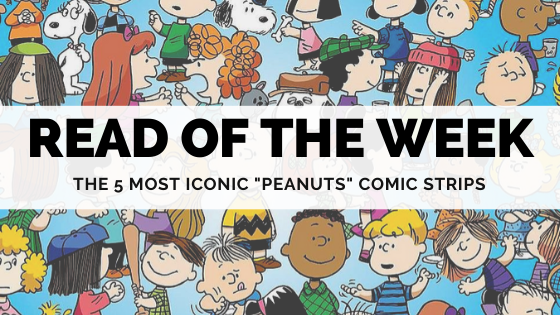 Prepare for another fun season (football season that is) with the Peanuts gang as the Museum is set to host Pigskin Peanuts later this year! Enjoy this quick read on 5 of the most popular Peanuts comic strips.

The 5 Best Peanuts Comic Strips of All Time

For 50 years, a round-headed boy in a yellow and black shirt and his lovable pet beagle brought smiles to the faces of millions of readers around the globe each day. The world was introduced to Charlie Brown and the Peanuts gang on Oct. 2, 1950, when the first comic strip debuted in nine newspapers around the U.S. Peanuts quickly became one of the most popular comic strips of all time and influenced movie, television, book and theater spin-offs. Most people can relate in some way to the charismatic Peanuts characters and simple-yet-profound situations in which they find themselves. Here are the 5 most iconic Peanuts comic strips of all time.

Charlie Brown, Peanuts’ main character, is introduced for the first time, along with the characters of Shermy and Patty. Although he’s not yet wearing his iconic striped shirt, Charlie Brown’s round head and naive smile are instantly recognizable. This is the first time he is called “Good Ol’ Charlie Brown,” a nickname that continues to haunt him throughout the strip.

Snoopy, Charlie Brown’s pet beagle, appeared for the first time as an ownerless dog on the street. It was only later that Snoopy would be identified as Charlie Brown’s loyal sidekick, although he quickly became one of the most recognizable characters in the comic strip. In Peanuts’ early years, Snoopy behaved like an average dog, his human characteristics evolving over time.

Every year without fail, Charlie Brown falls for the football gag when Lucy tells him that she’ll hold a football for him to kick. Although Charlie Brown does not trust Lucy at first, she persuades him to kick the ball, then pulls it away at the last second, just in time for him to fall to the ground. Although Lucy made this prank famous, Violet (shown above) was actually the first one to pull the ball away from Charlie Brown, not to spite him, but in fear that he would kick her hand.

The first time Charlie Brown says, “good grief,” is in reaction to more of Lucy’s mischief—this time, it’s her misunderstood attempt to show him a large bug. This becomes Charlie Brown’s catchphrase and part of the worldwide Charlie Brown lexicon.

Snoopy did not walk on two legs for the first seven years of the comic strip, instead behaving like a normal dog and walking on all fours. Snoopy’s transition to two legs completes his image as a partly human characters. Snoopy appears to be a dog who often forgets he’s a dog, instead walking, talking and interacting with others as if he’s a human.

After 50 years, Schulz announced his retirement from Peanuts. This final Peanuts comic strip was published the day after Schultz’s death. Major characters and moments from the comic strips past appear in the final comic, surrounding Schultz’s letter to his readers and giving the comic strip a nostalgic and fitting farewell.

This article was written by Elisa Marks on October 13, 2013, for the American Profile online newsletter.